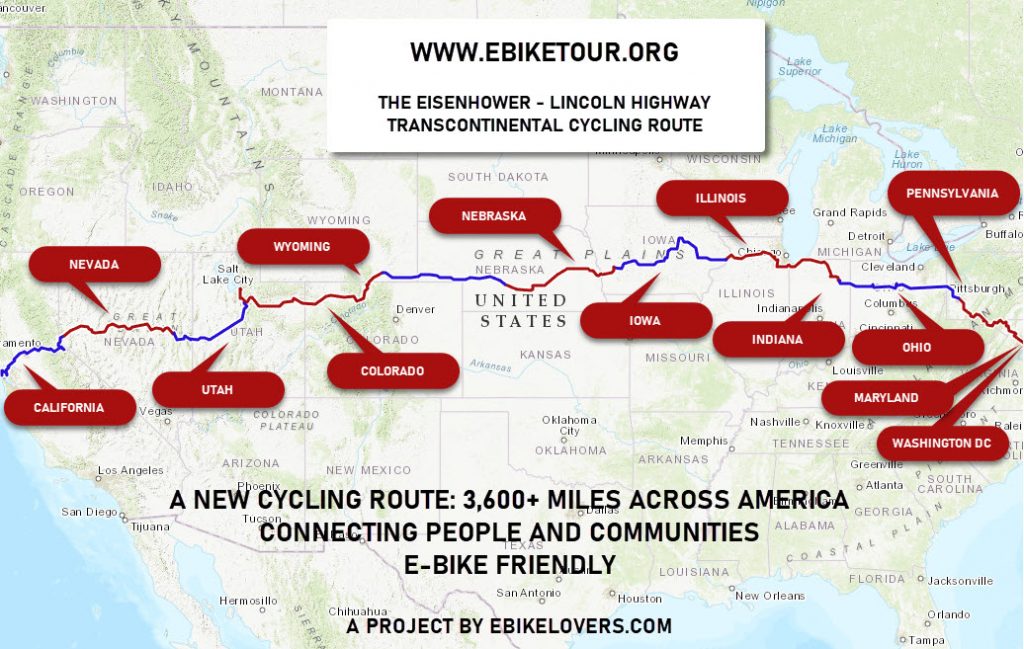 For many years, only three transcontinental cycling routes existed in the United States. The Northern Tier, the TransAmerica Bicycle Trail, and the Southern Tier.

After fifty years, the Eisenhower - Lincoln Highway Transcontinental Cycling Route is a brand new cycling route across America designed for this project. It follows the route of a historic convoy with Ike Eisenhower that left the White House on July 7, 1919.

It took the historic convoy two months to complete the route as they traveled 6 miles per hour.

The original three transcontinental cycling routes (in blue) were developed by the Adventure Cycling Association in the 70s before e-bikes were common. Our new transcontinental route (in red) is designed with e-biking in mind, with plenty of accommodation and stops to charge the batteries. It crosses the Northern Tier twice and the TransAmerica cycling route once.

It took a year of meticulous planning to design a cycling route (in red above) that follows the route of the convoy when feasible, using virtual reality tools and state-of-the-art routing software. Each intersection has been reviewed using Google Maps Street View, Google Earth, RidewithGPS, satellite imagery, and cycling maps.

Gregory explains the historic significance of the route in the fundraiser promo.

The route is divided into ten segments and is approximately 3,600 miles. It starts at the obelisk near the White House and ends at the Western Terminus of the Lincoln Highway in San Francisco. 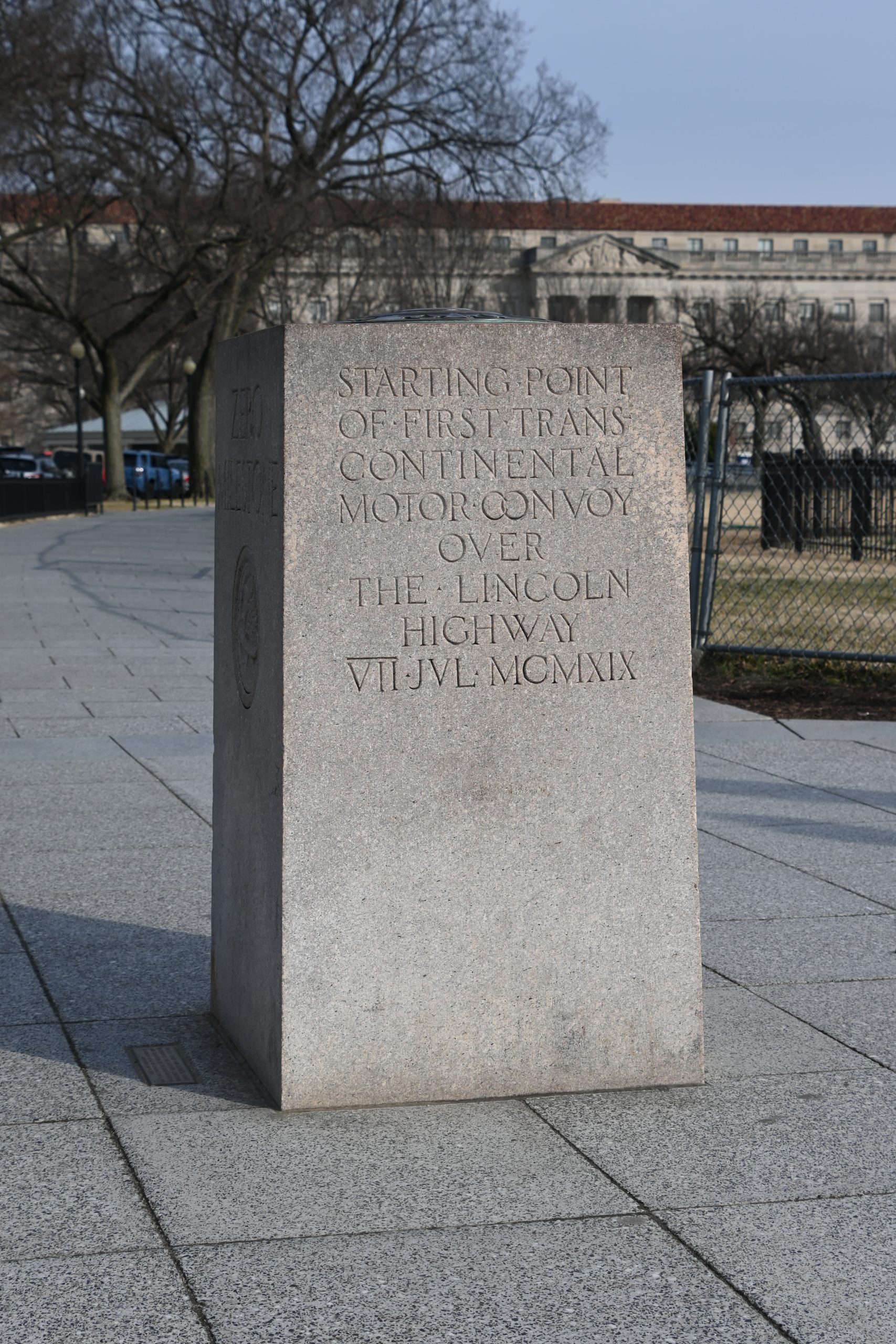 The obelisk at the White House is the starting point of the Eisenhower - Lincoln Highway Transcontinental Cycling Route Across the United States. 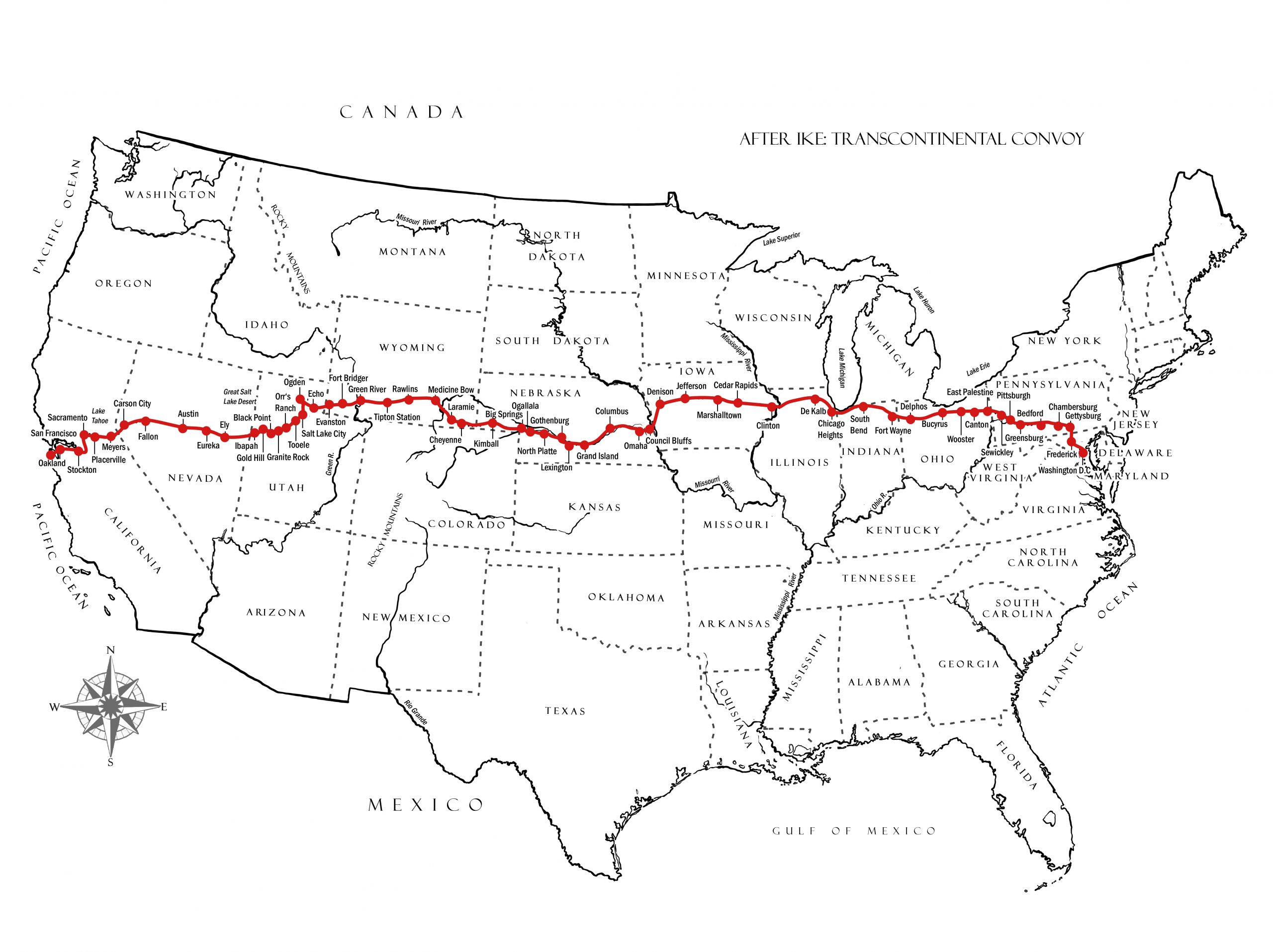 The Eisenhower - Lincoln Highway Transcontinental Cycling Route connects local communities and follows rustic country roads and cycling routes whenever feasible. This is not the fastest route across America, but certainly one of the most fascinating and historic cycling routes in the country, even while it is brand new. 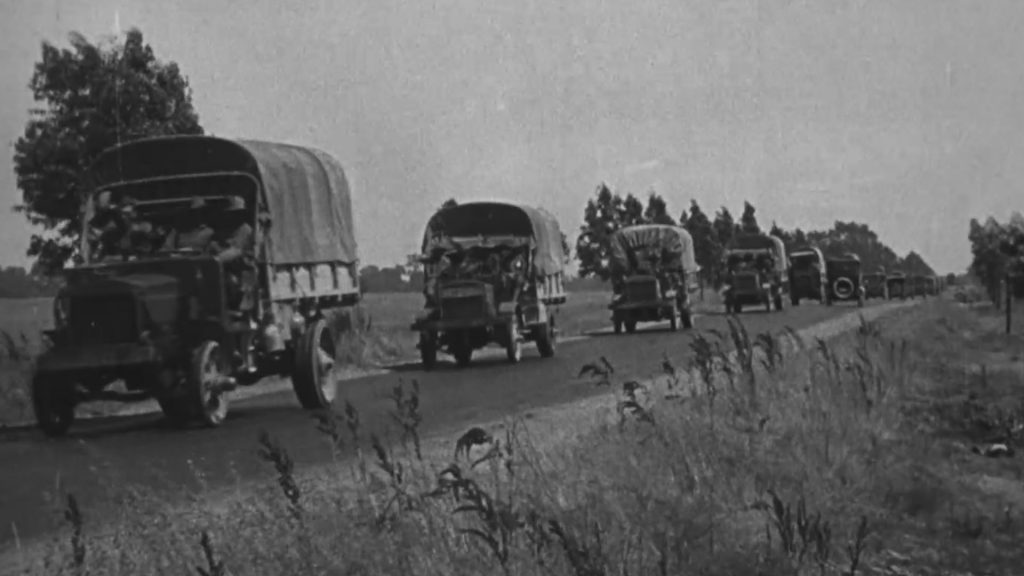 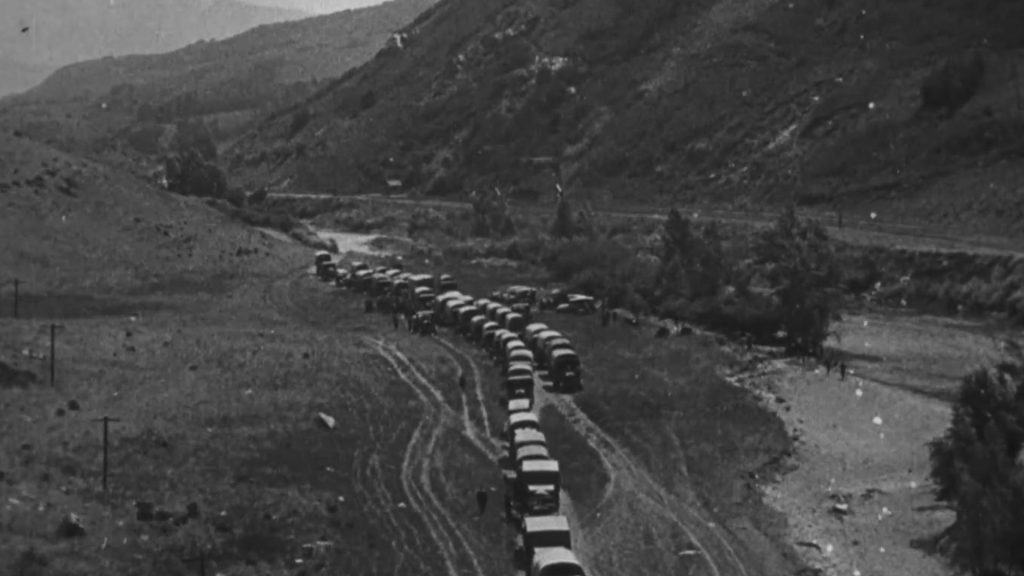 West of Morgan, Utah, August 18, 1919. Stop in the eastern end of Webber Canyon for rest and chow. 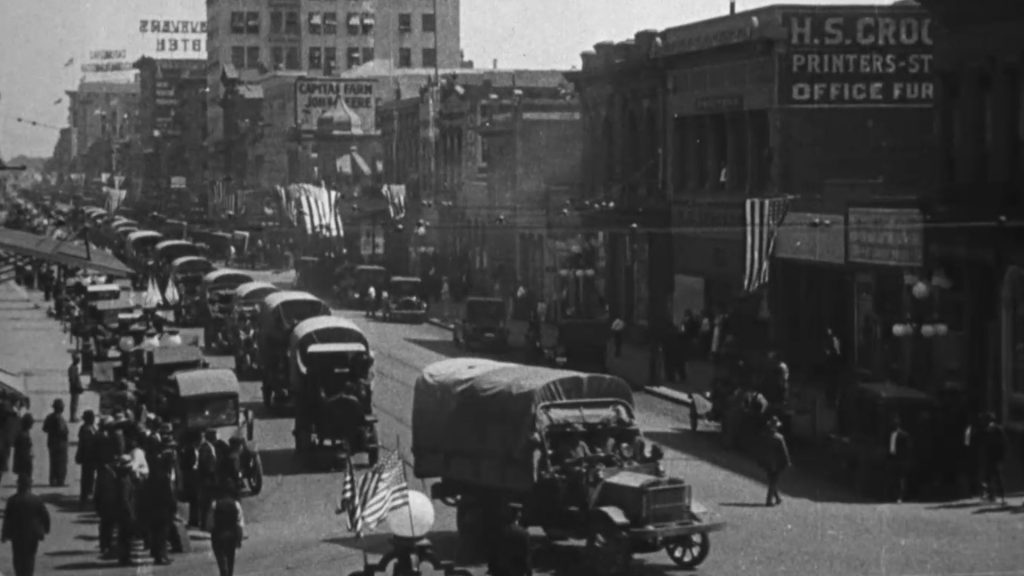 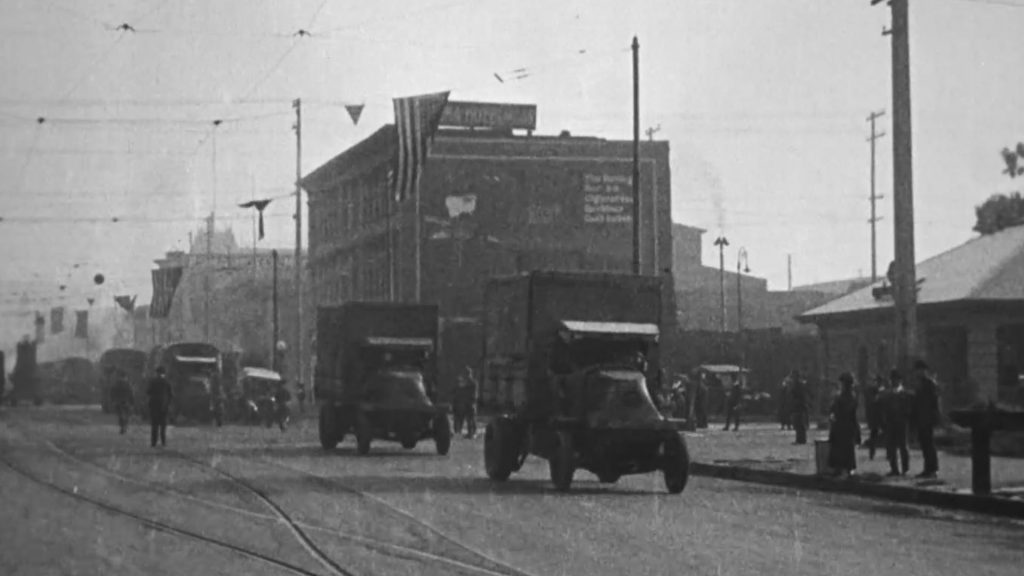 Near Livermore, California, September 5, 1919. Through the Altamont Hills. 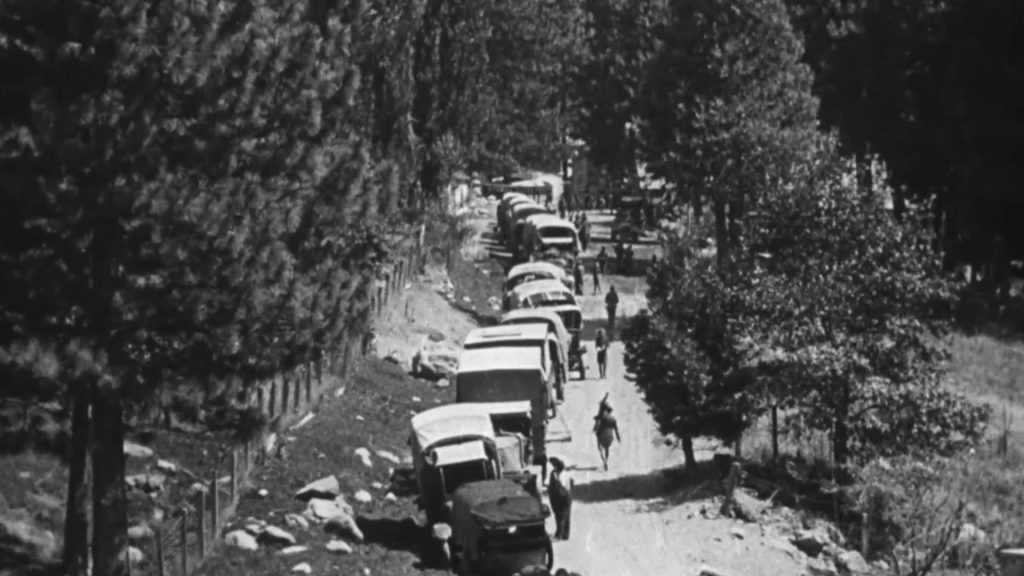 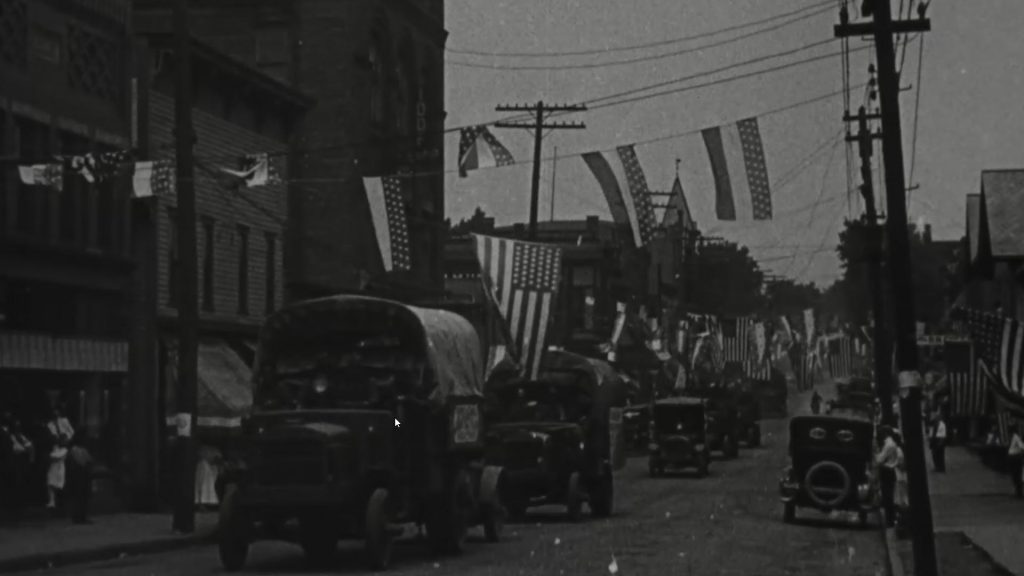 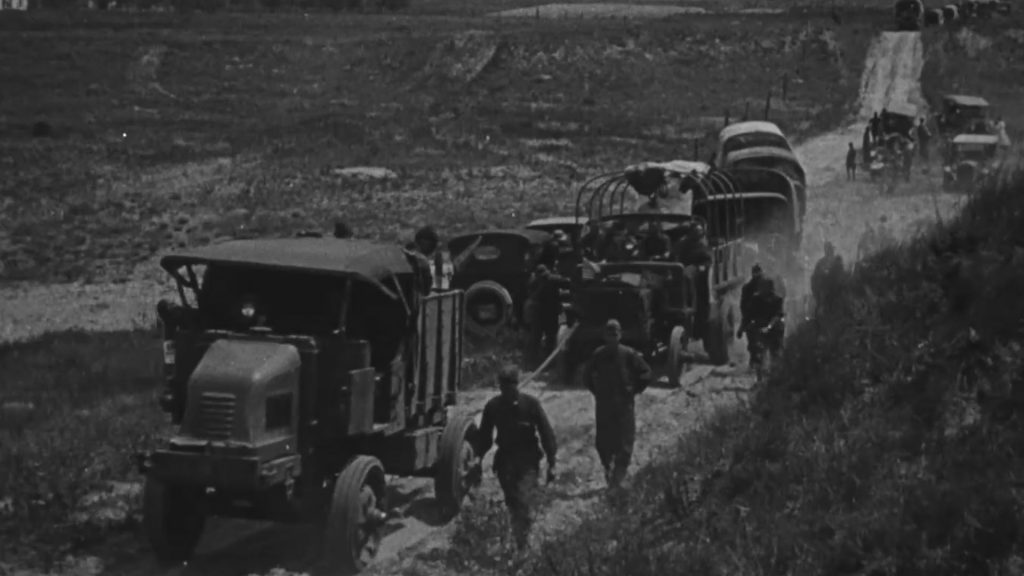 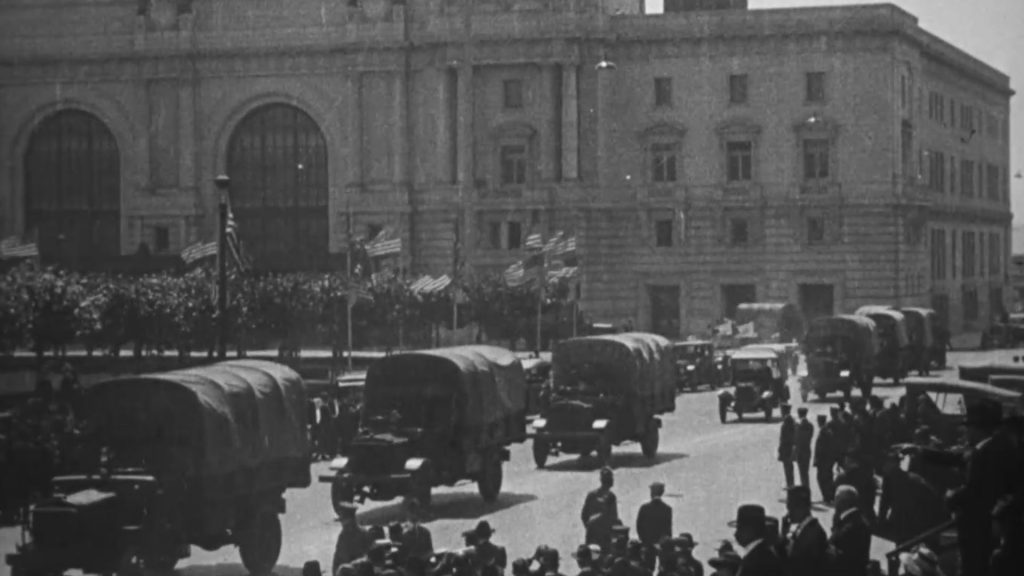 Convoy in review before Mayor James Rolph, Jr.,city officials, and officers of the Western Department of the United States Army.

Certain areas that were traveled by the historic convoy are no longer accessible or too dangerous to cycle. The route avoids Interstate Highways such as Route 80 and favors regional highways and cycling routes, connecting local communities.

A final version of the route will be published after Gregory has e-biked the entire route in 2022.